As a regular aboard the drift boat, Gary has fished up and down the Caney Fork and Clinch Rivers. He also has caught some large trout. I have always said that the most important element of catching big fish is putting in your time. Gary is a great example of that philosophy in action. Last year, he even busted the curse of the banana by landing the largest fish of the year on a guided trip with me.

For catching the largest guide trip fish of the year, Gary won a free float trip. This year we are offering the same deal. If you catch the largest fish on a guide trip with Trout Zone Anglers this year, you will win a free trip next year of equal or lesser value. Anyway, for the last several months, Gary and I have tried to make this trip happen. The flows were bad up until now for each time we had tried to schedule the trip. Thankfully, we were able to make a good long low water float happen, and Gary made the drive up for an early start.

During the float, we kept hoping for a big brown trout or two. Last week, I had a couple of 18-19″ brown trout caught, one by a first time fly angler. This trip just did not seem to be Gary’s day for a big fish though. We really weren’t even seeing many larger fish. Some days they are out and some days they aren’t When we started seeing large numbers of stripers, we knew what the problem was. Overall fish numbers were down on this float. Instead of catching an easy 30-40 fish, we were working very hard for 15-20 trout. The stripers were eating trout and also keeping them in tighter to structure. By the time we were pulling the boat out, I had one last idea for Gary.

“Want to head up to fish the dam pool with streamers?” I asked. After inquiring what the chances were for a big fish, Gary decided to go for it. We were running low on time, so we head right up and dumped the boat into the water for that last minute streamer session. We started with some smaller flies on the six weight Orvis Recon.

Streamer fishing the Caney Fork for big brown trout can be a long monotonous chore or an exciting change of pace. One big key is if the fish are willing to eat big flies. On high water, that likelihood is vastly increased from during low water periods. Since we were low on time, we were not going to float down the river but instead simply stay up around the dam and hope for something good.

After the first pass, we noticed a big fish or two busting on the surface. These signs of feeding are always a good omen. I quickly tied on a large streamer to the 7 weight and explained to Gary where I wanted his casts and how I wanted him to retrieve the fly. He quickly established a rhythm but those big fish had become scarce. The best thing I knew how to do at this point was to cover water in the vicinity of where we had seen those big brown trout. It was beginning to look like this would be an exercise in futility but the trip wasn’t over. No, we still had about ten minutes left. Gary had a timeline he needed to follow unfortunately so we weren’t very flexible on time.

I decided for one more pass through the pool. This time, I rowed way out into the fast water and set up a good steady drift down stream. This would allow Gary to present the flies at the right speed and depth across the current. Suddenly, the line came time and Gary got a solid strip set into something big. From there, everything seemed to go wrong and not due to anything we did. The fish ran hard straight up and into the current. We had a lot more line out than I like in such a situation. Next it ran downstream before circling back around straight at the boat. At this point, both of us thought the fish was gone. The line went completely slack and Gary started reeling in the line for another try.

Once the line was tight again, the fish was still on. At this point, the fish was starting to get tired. I quickly backed the boat out of the fast water where we would have a chance. The fish eventually followed although not very willingly. It had another good run or two left, but finally an extremely heavy 24″ brown trout slipped into the waiting net. Gary had done it again with a new guide trip record fish out of my boat.

We took a couple of quick pictures, but mostly kept the fish in the water. It was deservedly very tired so I took some extra time reviving it. When it swam off, we were both confident that it would swim to fight another day. 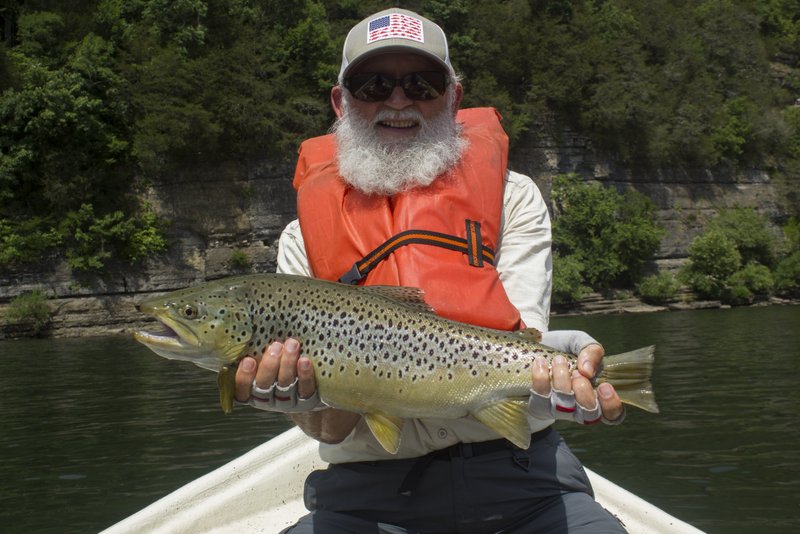 The Caney Fork is still fishing fairly well. Unfortunately, the Corps of Engineers is not leaving much water in the river for the fish or the anglers. Somehow, we have got to get them to establish minimum flow guidelines on the Caney Fork River. Also, hopefully they will quickly resolve whatever new issues they have “discovered” at the dam and return the lake to normal operating levels.

The upper river is fishing best now as stripers have moved up to within 5-6 miles of the dam. Everything from that point down is going to be difficult fishing. The usual midges and nymphs are getting it done on low water although terrestrials are starting to come on now. Streamers are still catching some nice fish on high water although the overall action will typically be slow overall.

The Clinch is in its normal summertime routine. Some days it is the Cinch and other days it is the Grinch. Midges will catch the most fish but don’t overlook streamers or even big terrestrials on high water in particular.

This is setting up to be a good summer in the Smokies. We still have enough water to keep the fish happy and healthy, at least right now. Terrestrials are very important but don’t forget your golden stonefly and Isonychia imitations either. Yellow sallies, sulfurs, and light cahills are still around a little in the mid to high elevations. The little yellow stoneflies will continue until fall as will the Isonychias and even the occasional golden stone. Ants, inchworms, and beetles are doing great now. I have spent a lot of time on brook trout streams this year and hope to continue that trend. People who are willing to walk are catching lots of fish while anglers who prefer or are limited to roadside fishing will catch fewer. If the water comes up and gets stained from rainfall, don’t forget your streamers.