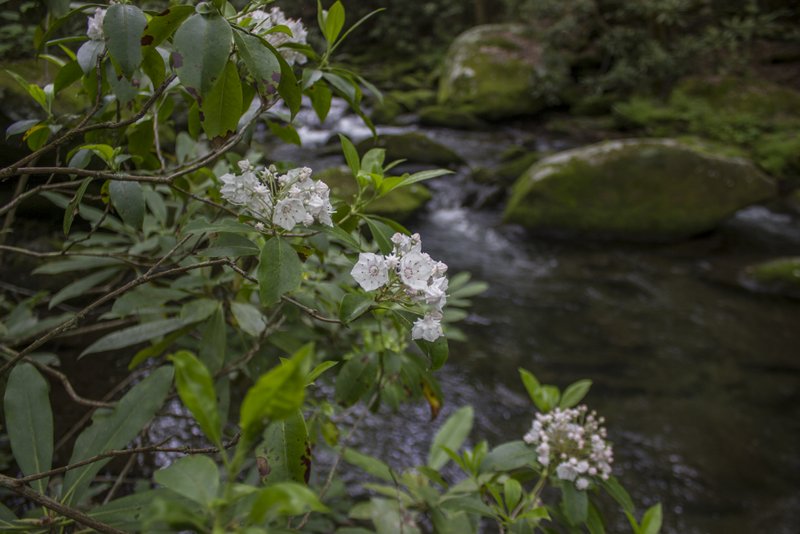 The Middle Prong of Little River is formed by the junction of two tributary streams, Lynn Camp Prong and Thunderhead Prong. The latter is a fine wild rainbow trout stream with plenty of small feisty fish that are often eager to take dry flies. A non-official trail or manway provides access to the lowest mile or mile and a half of Thunderhead Prong, but above this point an angler must fish up into the Smoky Mountain backcountry.

This stream is made up of pocket water with intermittent large plunge pools which harbor an occasional surprise larger rainbow or even a rare brown trout.

Stealth is paramount on this stream as on most streams in the Smokies. For some reason, this stream will drop to lower levels than some other streams in the same vicinity, probably at least partly due to its small drainage area. Thus, it can be tough to fish during the hot dry days of summer. Bouts of cool rainy weather can bring alive its inhabitants and bring on a feeding frenzy.

The only tributary of note to Thunderhead Prong is Sam’s Creek. This little gem is a nice brook trout stream containing a restored population of Southern Appalachian brook trout. The stream is small with lots of pocket water as well as larger plunge pools which can harbor some nicer fish. Expect lots of little fish with the possibility of some nicer fish up to 8 or 9 inches if you are lucky. This is not the place to go if catching big fish is your thing.

The downside to either of these streams is that once someone has fished them, it will take a minimum of several hours and possibly even all day before the fish recover. Hiking two miles up to fish for brook trout only to find that you are fishing behind another angler can be disheartening. Also, the “trail” to Sam’s Creek is not an officially maintained Park trail, so it is recommended that you go with someone who has been before unless your route finding skills are excellent.

While both Thunderhead and Sam’s Creek are fine streams, there are better fishing options in the same vicinity that are more accessible. If you are at all concerned about the safety of being in the remote backcountry off-trail, I would recommend that you stick with Lynn Camp Prong if you want to catch brook trout in the Tremont area.