Choosing the right flies to match the prevailing hatch is important to fly fishing success in the Great Smoky Mountains National Park. Here in the southern Appalachians, anglers fall into one of two categories or somewhere in between. On one extreme are members of the camp who fish the same two to three fly patterns year round. Some excellent anglers fall under this category and they usually catch good numbers of fish. On the other extreme are anglers who strive to learn as much as possible about the insects that trout eat. Often resorting to learning the Latin names for the bugs, these anglers only fish very accurate imitations of the insects they see hatching on the streams. My own philosophy on the subject lies somewhere in between but leans towards matching the hatch.

My reasoning goes something like this. Hatches are not usually heavy enough to produce highly selective feeding behavior on the part of the trout in our mountain streams except for in the spring time. The streams of the Great Smoky Mountains are generally relatively infertile, not sterile mind you, but definitely lacking the blanket hatches of some famous waters. However, at certain times of the year, different insect species are in greater supply than others. Thus, it makes a lot of sense to at minimum match one of the most common insects at any given time. I always start this way but then match the hatch once bugs become apparent. A careful angler can match multiple hatches with the same fly as you will notice in the charts below. Specific imitations of the exact insect can be used, or, with less selective fish that we often (but not always) encounter in the Smokies, you can often use the same fly for multiple hatches.

Learning further about what water types certain insects prefer as well as being both patient and observant when watching feeding trout, anglers can usually further narrow down their fly selections. Occasionally fish become quite selective, and to continue catching trout a good angler will match the hatch accordingly. For me, when there are not bugs on the water, I normally tie on the fly that the fish are most likely to have seen recently. Rigging a dropper under a dry fly or using a two nymph rig doubles the chances of catching fish and also helps you to experiment with more flies.

This advice mostly applies to fishing front country streams or larger backcountry waters with better hatches. In the small to medium sized back country streams, matching the hatch will help you catch more trout, but you can normally catch a lot of trout on generic patterns as well because the fish are less pressured and thus less educated.

*A note on matching mayfly hatches. Note that a few generic nymphs can work fairly well for a large number of hatches by simply changing the size. Also, notice that insect colors start out dark in the early spring and progress lighter and lighter to yellow and cream by early summer. As we approach fall, this pattern reverses itself again. When no hatch is observed, it will almost always be best to fish subsurface. If the hatch is anticipated, fish nymphs starting an hour or so before you expect to see adults. Switch to emergers and adults as the bugs show up and the fish switch feeding patterns. 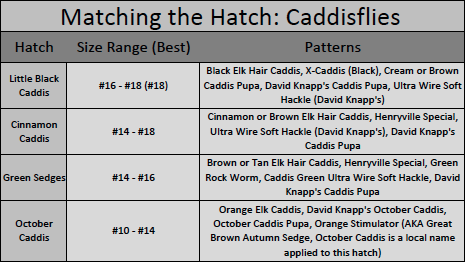 *A note on matching caddis hatches. In general, there are only a few species of caddis that are widespread enough in the Park to get the attention of many trout. The rest of the time, a fly like the tried and true Elk Hair Caddis makes a great searching pattern in yellow, tan, brown, or black and in sizes #14 – #18. However, while this fly has and will continue to catch many trout, there are often better patterns more closely imitating the prevailing hatch. The one fly that is rarely fished by most anglers that will catch a lot of trout is a caddis pupa pattern. A bead head version of a caddis pupa in #14 – #16 works very well as a dropper beneath a dry fly like an Elk Hair Caddis, Stimulator, or even a Parachute Adams depending on what insects you are trying to match with your dry fly. 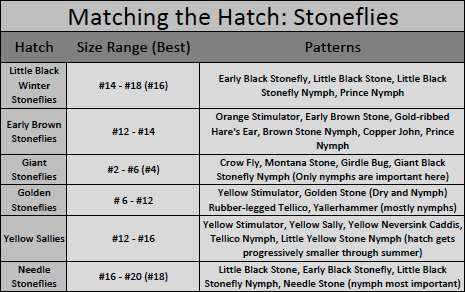 *A note on matching stonefly hatches. Adults are only occasionally important for anglers in the Great Smoky Mountains National Park. Most of the time, the smart anglers will be fishing stonefly nymph patterns through the heavier pockets and runs. Unfortunately, some of the best stonefly hatches (Golden and Giant for example) happen after dark. We may never know for sure what large trout are feeding on the huge bugs through the dark of night. The Yellow Sallies are the one exception to this general rule. From mid to late spring through mid summer, the evening Yellow Sally hatch can at times overwhelm anglers with the blizzard of insect on the water. Always remember that it is important to pay attention to the trout as I have caught fish on adult imitations of nearly all of the hatches listed above.

*A note on matching terrestrials in the Great Smoky Mountains National Park. During the hot days of summer, terrestrials become some of the most important foods for trout in the streams of the Great Smoky Mountains. Ants, inchworms, and beetles account for both large numbers of trout as well as some of the best fish of the year. If you tie your own flies, try sizing up or down from the commercially available patterns. Sometimes a simple size change is all it takes to fool the fish. Remember that summer features low water and the trout have been educated for several months already with fishing pressure really starting in early March most years. Downsizing can be the difference between an average and a great day.

Other Hatches and “Hatches”

You will probably notice some bugs are missing from the above list, including midges and craneflies. My advice on midges is to always have some. Seriously! In the winter, especially, midges can save the day. Pupa and larva patterns are great although you don’t have to get too fancy. A simple Zebra Midge in sizes #18 – #24 is probably all you will need although occasionally you will find fish rising to emerges or adults as well. For the craneflies, considering fishing a cranefly larva pattern if you see the adults on the water. In my experience, it is rare for the adults to be important to the trout of the Smokies although I have seen fish rising to them on occasion. Other important flies to have? Streamers that match sculpins and crawdad patterns are important if you are on a stream that has brown trout. Worm patterns can be deadly as well, especially when the water is high as well as throughout the winter. Egg patterns can catch some fish around the spawn, but I’ve never felt that I missed fish by not fishing egg patterns and I don’t recommend fishing near or to spawning fish. Leave them alone to do their thing.